The Keychron K2 is delivered to customers in 3 versions:

On our hands today is the Keychron K2 with plastic frame & RGB backlighting & Gateron Red switches. 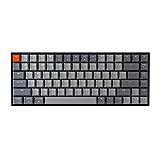 The Keychron put a lot more effort into the K2, and the result is K2 has a nicer look than the previous Keychron K1. The Keychron K2 made use of 75% form factor (you can read more here) which is quite convenient for those who rarely use the right side numeric cluster, but also still want to retain the Function keys cluster and several dedicated navigation keys (such as Home, End, PageUp, PageDown)

As mentioned earlier, the version that we’re reviewing is the Plastic frame with RGB backlighting. Why we chose the plastic frame? The reason is simple: Portability. The Keychron K2 plastic version’s weight is 23oz (or 663gr), while the aluminum is 28oz (or 800gr). Carrying around extra 5oz is troublesome when you travel light. Although to be honest, we prefer the feeling when typing on aluminum frame.

At the bottom, you will find 2 legs (or raisers) with 2 different levels of height that offer 3 levels of height for your preference. Along with 2 rubber feets that prevent the keyboard from slipping.

This plastic shell is quite well finished by Keychron, once again we have to praise Keychron for making it very solid, although while holding it, it feels a bit light with the plastic frame version. This is embarrassing to say but we accidentally dropped the K2 from the table to the ground but everything was intact.

The built-in battery on the Keychron K2 is also massive with a capacity of 4000 mAh – that is equivalent to the battery of a current gen smartphone phone. The battery life as announced by Keychron is 15 hours with the white backlight version, 10 hours with the RGB version. So if based on the published number, it can be imagined that at least you can use it continuously for about 1 working day, but that is unless you type continuously for 10 hours. Personally, I have used it for 3 days without recharging.

As we mentioned earlier, Keychron K2 has an 75% – 84-key layout, not too strange for those who have experienced custom mechanical keyboards. For those who are new to a keyboard with this layout, you need to get used to it because the rightmost row of keys will be Home / End / Page Up / Down. The navigation keys are taken to the bottom right corner, located just below the Enter key and next to Control, Right Shift. These keys are still kept the same size, so the operation is not difficult, and you may need some time to be familiar with the new layout.

As a keyboard optimized for Mac, Keychron K2 fully integrates the main function keys of the Mac on the Function key row. It almost simulates the keyboard experience on the MacBook: from the position of the screen brightness keys, Launchpad, Mission Control, keyboard brightness, multimedia keys, volume control, mute from F1 to F12 keys. Next to this row of keys are 3 keys including screen capture, Del key and RGB lighting effects. Similar to the Command and Option keys, the Keychron K2 for Mac completely. Mac users will not take time to get used to this Keychron K2.

Keycap is made of high quality ABS plastic, single-shot, thin and light as the default keycap on many common mechanical keys. Keychron also makes it different, looking a bit more like the PBT with a grainy coating that feels quite thick and a gray-brown keycap color accompanied by a few orange keys as accents. The design pattern of these keycaps is also intentional when the main keycap area is darker in color, the sub-keys are brighter, making it easier to grasp the key layout.

The characters on the keycap are laser-engraved with thin lines, high detail, the lighting effect of the backlight on the keycap is moderate, not too harsh on the eyes; and the light does not cause glare when used at night.

The rows of keys across the cross-section form a hollow with the middle row of the lowest and ascending rows of keys, so that fingers can easily reach all keys on the keyboard without having to move. too much. This is an ergonomic design, used on the keyboard from the past and is still maintained on the mechanical keyboard.

Keychron K2 has three switch options including Red (linear), Brown (tactile) and Blue (clicky + tactile) but all are made by Gateron instead of Cherry. The smoothness of Gateron Red switches is actually praised by the mechanical keyboard community as superior than other brands. Compared with similar Kailh switches or even Cherry MX, Gateron is always smoother when pressed, without the characteristic rough feeling like Kailh or Cherry MX.

I use this keyboard to type text on Word processor more than to play games, so the Red switch makes me feel a bit down because of the lightness when bottom out. Maybe because I’m still used the Blue/Brown switches that have tactile responses to each press, even weightlifting with Green makes Red make me lose my feeling of typing. However, in the office environment, in need of total silence, Red switch is still a preferable choice.

The switches on the Keychron K2 is from the Gateron’s KS-9 series with transparent switch housing, RGB lights integrated as SMD LEDs are located on the key’s PCB circuit instead of the traditional LED bulb attached to the housing. The durability of the Gateron switch is reported to be 50 million clicks, which is totally impressive, and on par with Cherry MX.

This does not surprise us at all as Keychron uses the Gateron switch because most of the emerging keyboard manufacturers now prefer to use switches from Kailh, Gateron, Greetech… to reduce costs. In addition, these switches still have a keystem design that is compatible with Cherry keycap, satisfying the needs of decoration and keycap play.

We tested by switching between a MacBook Pro, a Windows laptop and an Android phone. The switching time between devices was very short and barely noticable, as switching only took 1 – 1.30. seconds. Pairing is similar to the Keychron K6 as we reviewed.

For the price point, Keychron K6 is really an attractive alternative mechanical keyboard to the Apple Magic Keyboard (which is horrible in every terms). For whatever reasons, we insist that you replace your Apple Magic Keyboard with this the Keychron K2 and we promise you will never look back. If you prefer portability, pick the aluminum case version.

Everything you need to know about keyboards: Part 1 – Keyboard by Type of Switches